The data on women’s and men’s average salaries is available already! – So what?...

My example is Lithuania, where women composed 56% of researchers in the higher education sector in 2015 and 39% among those on the grade A positions in Lithuania 2016. One the one hand, the rates are (almost) ideal as they appear in the 40/60 gender balance zone. However, on the other hand, the generalized balance rests on gender segregation by field of science (women are still in minority in STEAM fields). In addition, it is widely known that feminization of R&I (including universities) is highest in the countries with lowest expenditures for R&D/I. And Lithuania is among them. 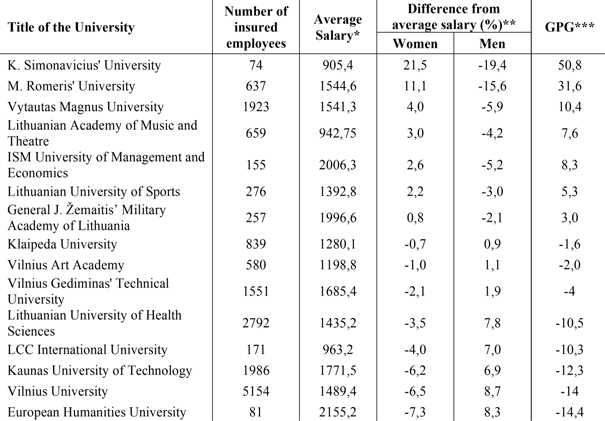 * Average of insured incomes of employees who were insured for full and not-full calendar month. Data downloaded from SODRA (The State Social Insurance Fund Board under the Ministry of Social Security and Labour) on the 26th May, 2021.

** Minus (“-“) sign denotes salaries which are smaller than average salary in the university.

*** Gender pay gap. Calculation based on men’s average salary as 100%.

Previous studies suggests that men’s salaries are bigger than women’s till age of 41 year; later, because men have smaller loadings, women earn more. However, it is acknowledged that women compose majority on the lowest positions in the universities. Thus, in general, there is no reliable explanation for variations in women’s and men’s average salaries at the universities. GPG does not correlate with size of university or with size of average salary in the particular university. For example, it would be reasonable to highlight that GPG is largest and women earn much more than their male colleagues in the small university where salaries are the lowest in Lithuania (i.e. K. Simonavicius' University). However, men earn 10% more than women in other small university with similarly low salaries (i.e. LCC International University). Also women earn more in several universities which are led by female rectors (i.e. M. Romeris' University and Lithuanian University of Sports), but men earn more than women in other one which is also led by a woman (i.e. Vilnius Art Academy). Even more: women earn slightly more than men in supposedly the most masculine academic institution – i.e. General J. Žemaitis’ Military Academy of Lithuania.

So. Yes! Here is data for analysis of academic salaries from gender perspective. However, the data just provide facts; additional data and information which could lead to systematic exploration of reasons lurking behind the facts are still lacking. It follows that any empirical information based action is not possible still.